by Andrea Hambly., Olympia, Washington on April 19, 2011 in Craniosacral Therapy

Cluster headaches, so called because they have a tendency to appear in time “clusters”, are an excellent candidate for craniosacral therapy because they involve all the cranial and facial bones, as well as the sutures that connect them, and the connective tissue (sutures are a form of connective tissue), such as the meninges of the brain, and the fascia that envelops, and weaves through, the muscle tissue.

There are numerous theories regarding the etiology of cluster headaches. One that has not been seriously considered is the shifting of cranial bones after trauma to the head, or anywhere along the spine.

Cluster headache attacks occur often with periodicity, such as several times per day for several weeks, no attacks for months or years, and then again for several weeks at a time.  Often people are awakened by excruciating pain in the middle of the night.

Cluster headaches not only involve the head bones (cranial bones) but also the facial bones. 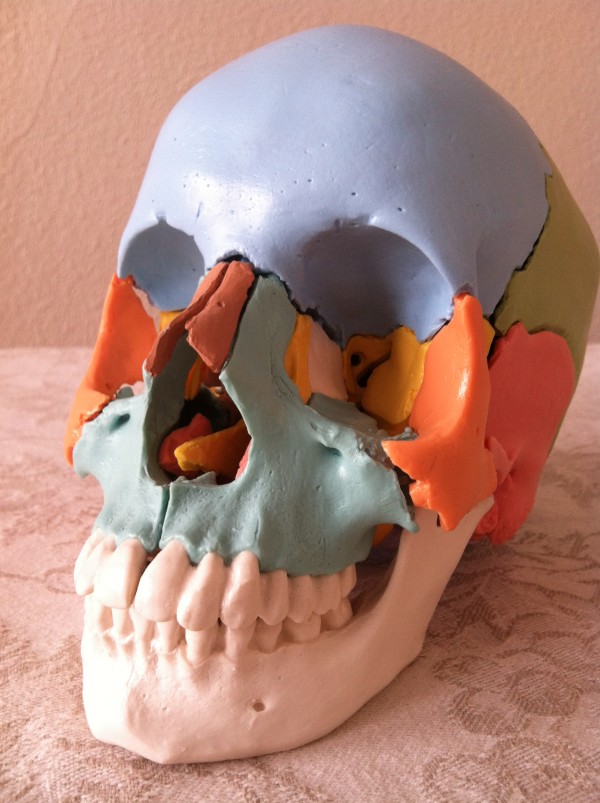 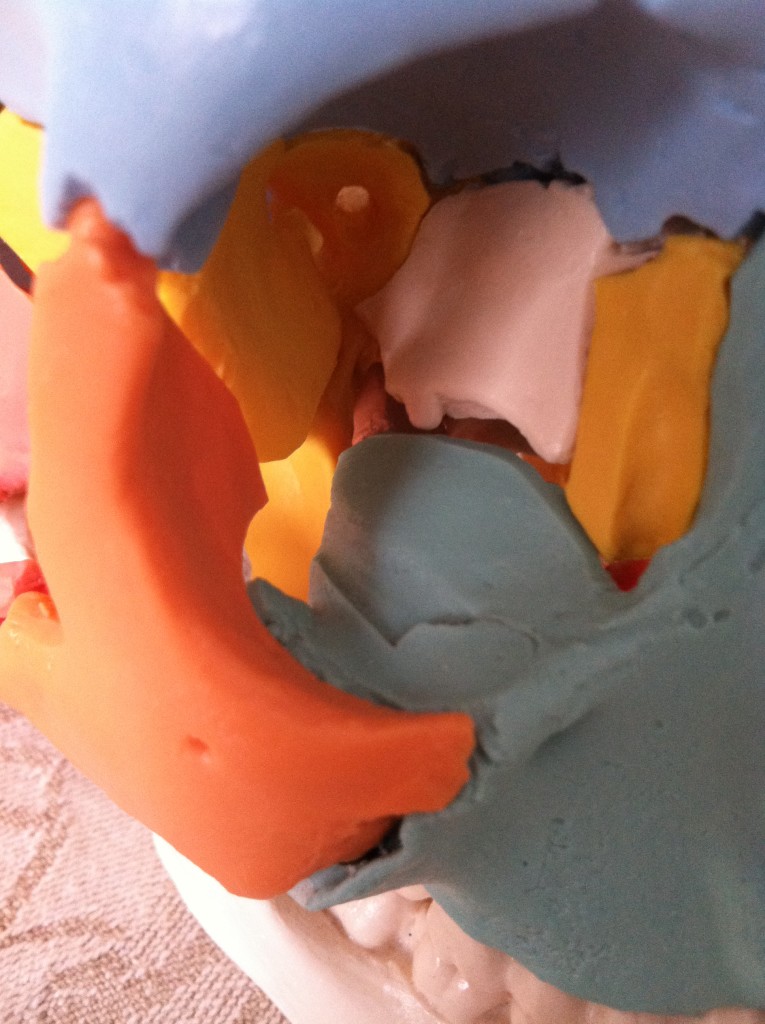 Most of the pain appears to involve the frontal bone (light blue), the zygomae (peach), the maxillary bones (aqua), and the temporal bones (green).  However, most frequently, the pain is centered in the orbit of the eye (eye socket), which is actually composed of many bones.  These are the

Another center of gravity for cluster headaches is the temple, which is one of the six fontanelles (soft spots) at birth. 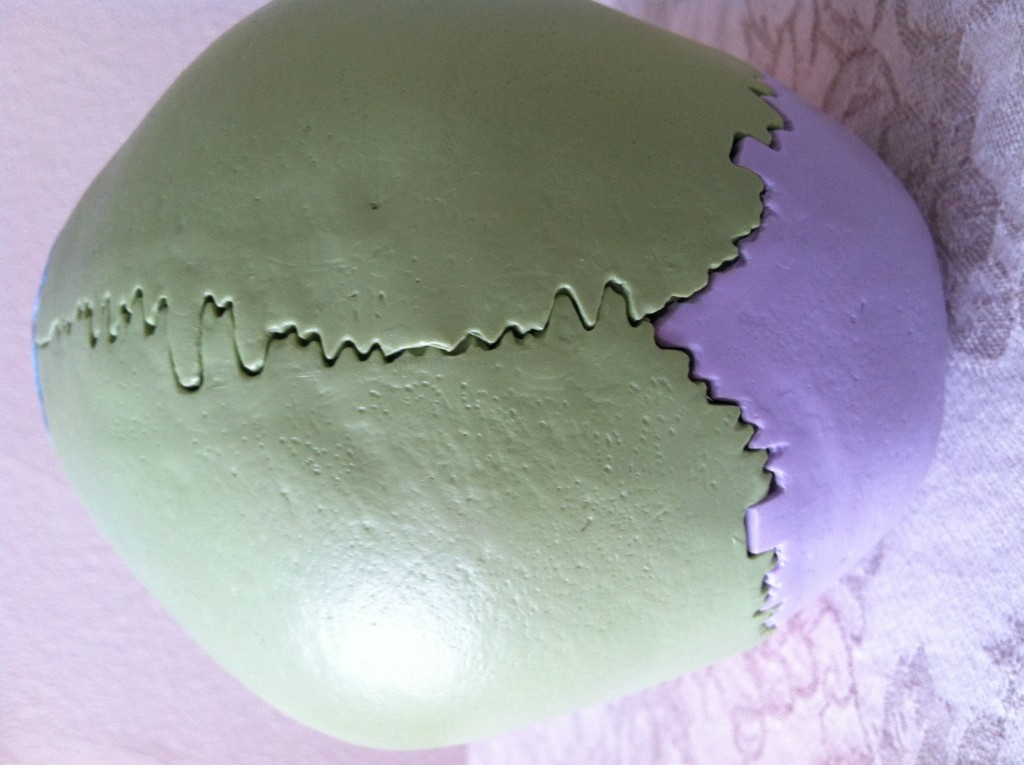 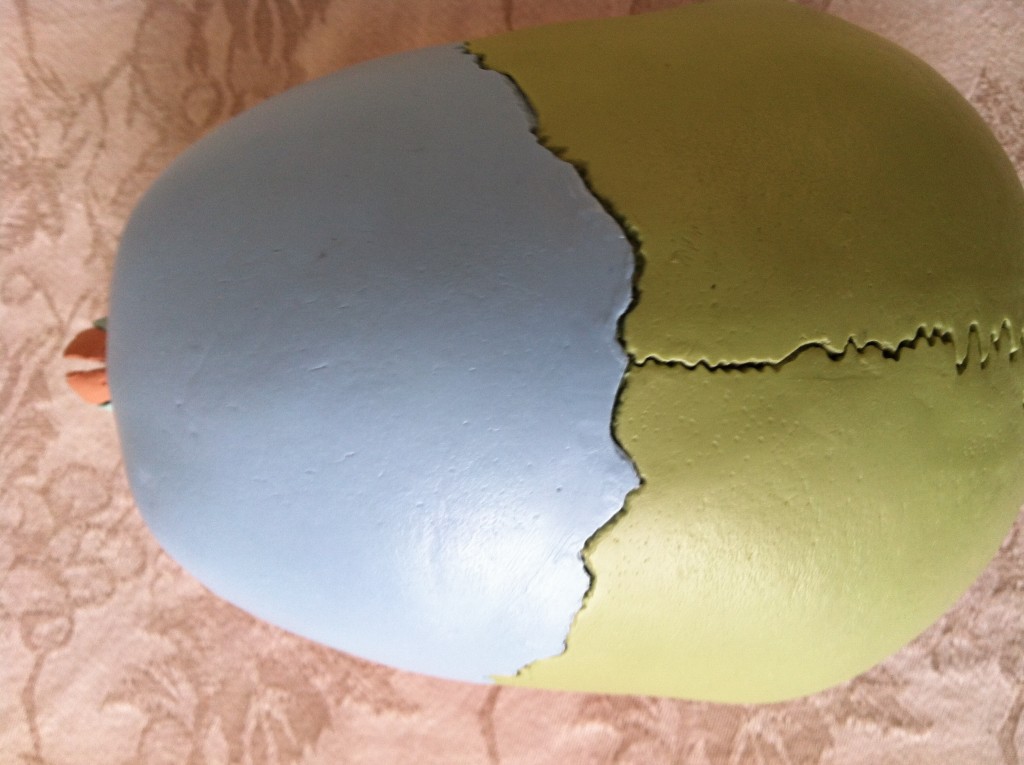 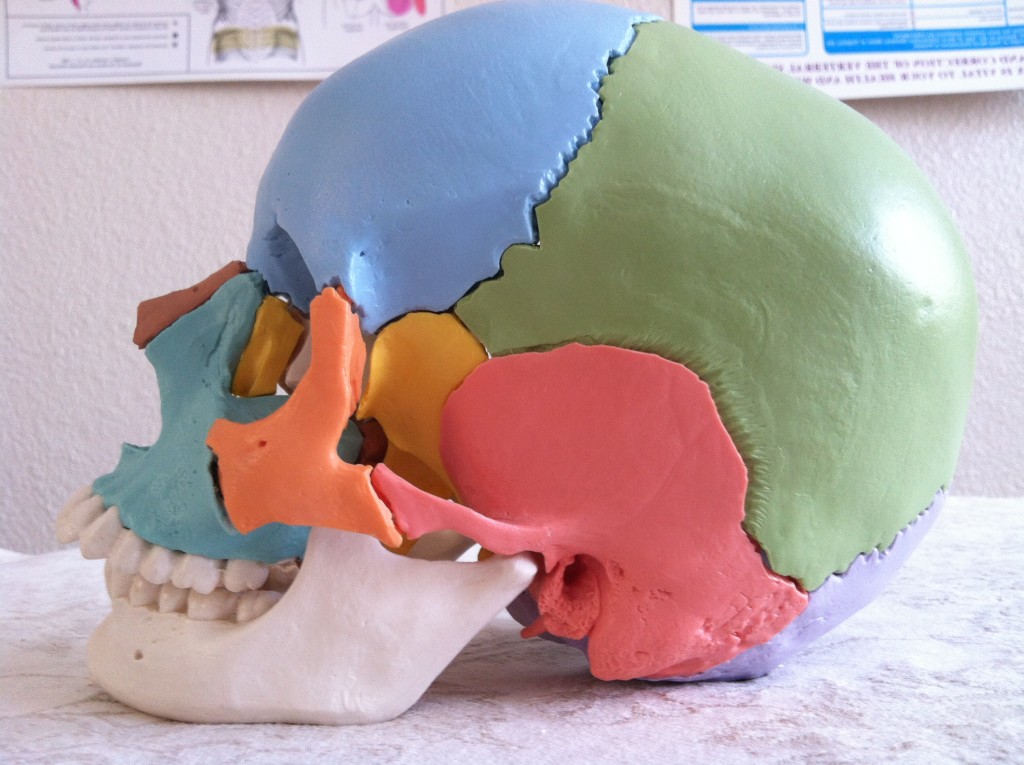 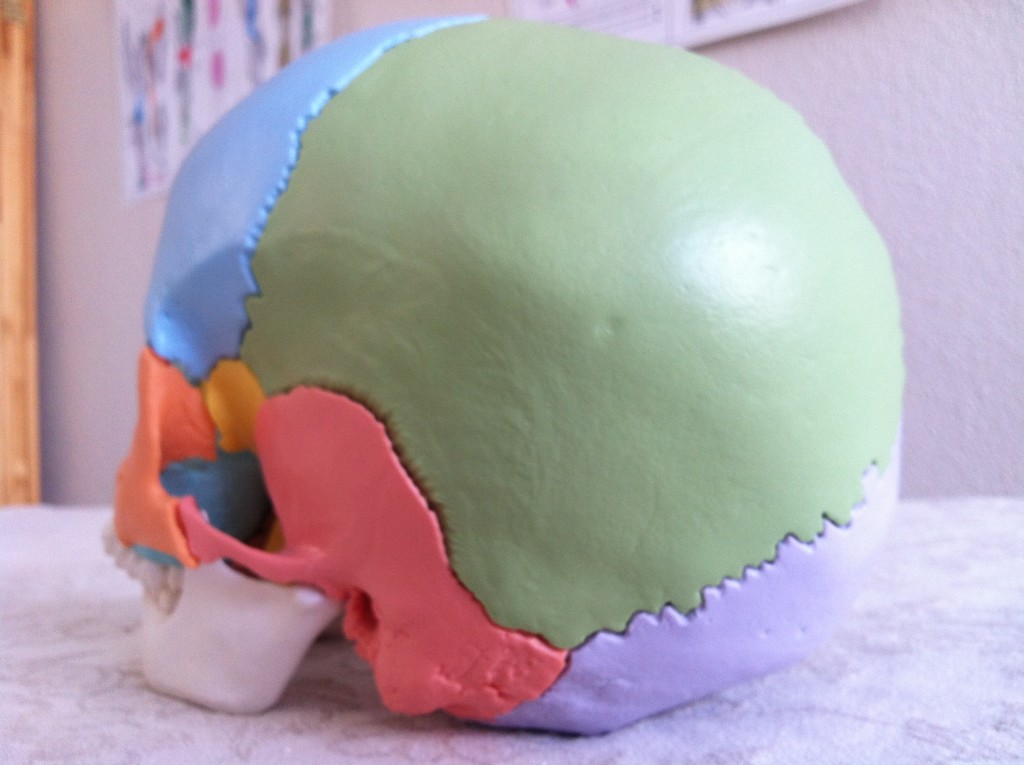 All the head bones (1 frontal bone, 2 temporal bones, 2 parietal bones, 1 sphenoid, and 1 occipital bone) are connected via the sutures. These head bones shift all the time as they adjust to the pressures and pulls arising from our body movements via the muscular and connective tissue.  When the head bones lock up anywhere along the sutures, or in the fontanelles, we experience all sorts of symptoms, including cluster headaches.

The fontanelles are inherently unstable.

We could use the analogy of earthquakes.  The fontanelles are major earthquake centers.   The sutures are the fault lines.  Just as the tectonic plates of the earth move all the time, so do the cranial bones (head bones or skull bones).

The fontanelles are particularly vulnerable to shifting of the cranial bones because they are areas where several cranial bones join together.  Hence, if one of these bones gets stuck in some way, so do the rest.  This means that the jarring of one of these bones is transmitted to all the other bones, and the “earthquake” thus spreads to more distant parts of the head, including the face.

Moreover, since the cranial bones are also connected via sutures to the facial bones, trauma of any kind to the head or the face, as well as anywhere along the spine all the way down to the sacrum (and coccyx — tail bone), may register in any part within this craniosacral system (from the cranium down the spine to the sacrum).

Head trauma and locking up of the cranial bones can injure the pituitary gland.

The pituitary gland, often referred to as the master gland and regulates all the hormonal functions of the body.  Moreover, it has feedback mechanisms to the hypothalamus and the limbic system (emotional brain).  These feedback loops explain the emotional component of the hormonal system. 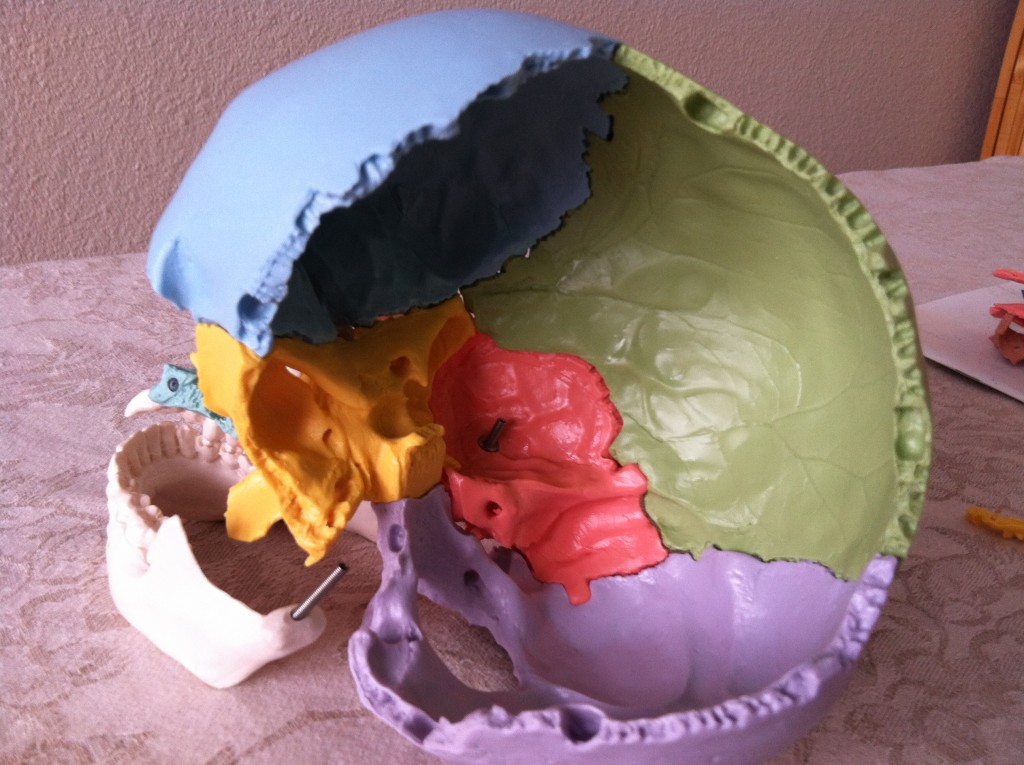 The pituitary gland is a pea sized organ that is located in the sella turcica (Turkish saddle), a small indentation in the body of the sphenoid (yellow bone), inside the head, almost in a straight line down from the bregma and  in a straight line from the root of the nose between the eyes into the center of the head. (the image above only shows the sella turcica, not the pituitary gland)

Trauma to the head or face may cause the sphenoid to shift, lock up, or create meningeal tension on the sphenoid that may result in over- or underfunctioning of this all important gland.  This explains some of the many different symptoms experienced with headaches, including cluster headaches.

Various symptoms may give a clue that the pituitary is involved, such as

The locking up of cranial bones may cause excruciating pain, tearing of the eyes, a runny nose, and flushing with sweating of the face.

The sutures between these bones (cranial sutures) are made up of fibrous tissue (Sharpey’s fibers), a form of connective tissue, that contains blood vessels and nerves.  Compression of these nerves may create the excruciating pain in the temple and eye socket associated with cluster headaches, as well as anywhere on the head.

Shifting of the maxillary bones or the ethmoid bone could irritate the mucosa (mucus lining) inside the nasal passage and result in rhinorrhea (runny nose).

The flushing and sweating of the face on the affected side can be explained by compression of the external carotid artery (click on image for larger view), which brings blood to the neck, face, and scalp.  This artery lies very close to the bones of the face, following a course between layers of the muscles of the face.  Hence, shifting of the facial bones may set of contraction in the muscles, as well as create tension in the connective tissue of the face, resulting in compression or stretching of this large blood vessel with its many branches.

The hypothalamus is located above the sella turcica, which houses the pituitary.  Thus, a disturbance in the functioning of the hpothalamus via pressure from the sphenoid may result in the periodicity as well as hormonal dysregulation and emotional upset.

Thus, the shifting and locking up of the cranial or facial bones can cause one of the most severe types of headaches, called cluster headaches.

The causes of the shifting and locking up of the bones are numerous and tend to be buried in the past history of the person suffering from cluster headaches.

Trauma is the most likely culprit.  It may be a single large trauma dating as far back as the birthing process, a fall on the head as an infant or a child, a baseball bat or ball hitting the head or face, dirt bike accidents, skiing into a tree, whiplash injuries from a car accident, as well as repeated head trauma from boxing, soccer, or football.

Everyday living that puts a load on the spine or head via muscular and fascial (connective tissue) tension cements in the old injuries and adds continuous stresses that eventually cause the head bones to overlap and lock up.  The only way out is a periodic “explosion”, analogous to earthquake tremors, in order to unlock the bones either partially or completely.

Craniosacral therapy can help people heal from all sorts of headaches, including cluster headaches.

Craniosacral therapy, which is exceedingly gentle and noninvasive, helps the body to release the tension in the muscles and connective tissue, accumulated over a life time from old injuries.  This gives the facial and cranial bones more space, allowing them to shift back into place more easily and quickly, with less pain.

Over time, craniosacral therapy can help to resolve the old injuries, and thus reduce the frequency of cluster headaches or entirely eliminate them.

A Note Of Caution

Note:  A sudden headache with no history of a previous headache like it may be caused by an aneurysm (bulging of an artery where the arterial wall is thinning; like a tire that’s ready to blow) in the brain and requires immediate medical attention.  Rupture of this aneurysm may result in permanent brain damage, or death.