by Andrea Hambly., Olympia, Washington on October 16, 2011 in Craniosacral Therapy

CRANIOSACRAL THERAPY, which has been around for the past 30 years, is a blessing for many people in pain or ill health, especially for those who cannot tolerate the more direct and intense contact of most other bodywork.

As with humans, so with our beloved pets.  Animals also suffer from fascial restrictions, which form over time due to injuries, infections, inflammation, and emotional distress.

Animals don’t have words to relay to us their discomfort or pain.  Often we don’t realize that something ails them until more serious medical intervention is required.

Animals do tell us through their body language.  Lackluster eyes, droopy tail, sticky fur, shrinking away from touch, moaning, hiding away, and so forth, are ways in which they let us know that they need our help.

I’ve been working with my son’s cat, Cashmere, for the past 2 years.  He used to be extremely shy and would only allow my son to touch and hold him.  To this day, my son is his beloved owner.

After doing craniosacral therapy with him for the past 2 years, Cashmere has become a family pet, holding his ground even with loud noises and sudden movements around him.  Moreover, he allows even my son’s small daughter to hug and pet him. 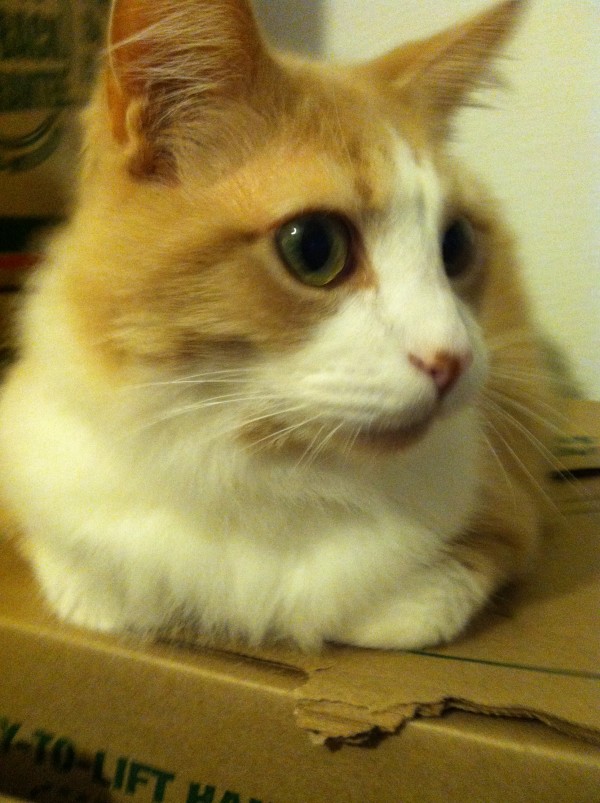 Cashmere was “adopted” by my son when he was around 9 months old.  Cashmere appeared healthy and in good spirits.  His previous owners could not keep him for unstated reasons.

When I met Cashmere soon thereafter, I fell in love with his beautiful green eyes, the size and shape of large grapes.  I noticed right away, and for the next 4 years, how shy he was around people other than my son.

Whenever I came to visit and tried to gently pet him on the back, he would collapse his back and slink away from the touch.  Moreover, he was spooked by the slightest noise or movement around him.

About two years ago, when I came to visit my infant granddaughter, he came near me and laid down, a very uncharacteristic thing for him to do.  I also noticed little twitches in his right front leg.

Ever alerted by signs of ill health, I decided to do a short craniosacral therapy session with  him, which he seemed to enjoy.  Soon, it became a regular event for us.  On every visit he would make himself available for another session.

Over the past 2 years, Cashmere has been struggling with mid- and low back pain, obesity, and digestive issues with leaky and irregular stools, as well as first signs of urinary problems.

Changing the type and the amount of food was helpful in reversing the obesity, a slow process, and craniosacral therapy has been a most helpful therapy in supporting his digestive health, as well as helping him to recover from his back pain.

Injuries Early In Life Can Affect Us Later In Life

In retrospect, I suspect that Cashmere may have sustained injury to his back in his first nine months of life that healed sufficiently to not be recognized by those around him.  Moreover, his consistent avoidance of touch by others helped to protect him from further injury.

However, this injury (or multiple injuries) was actually right beneath the surface, held in check by the fascia (connective tissue) until obesity, age, and the numerous little tweaks in life brought it back to the surface.

Craniosacral Therapy For Pets And Farm Animals Is Gentle And Non Intrusive.

Craniosacral therapy can be done on or off the body.  I did the latter for over a year because Cashmere was so “jumpy” about being touched anywhere.  Now, we do a mixture of on- and off-the-body therapy.

The causes of musculoskeletal pain, in humans and animals, are inherently difficult to trace.  Old or new injuries, infections, inflammation, digestive issues, urinary tract infections or stones, tumors, and medications can all contribute to it.

As with humans, the tendency is to employ expensive and invasive procedures to get a “glimpse” at the offender or to “visualize” the area of concern.  Often, surgery follows, which might have been avoided with a more gentle and holistic approach such as diet changes, herbs, homeopathy, and craniosacral therapy.

Craniosacral therapy, along with other natural modalities, can help your pet to become healthy again and remain healthy.  It’s gentle, non-invasive, and very effective.  Moreover, it may help your pet avoid unnecessary, and often unsuccessful, surgery.